My Wish List for FlexNet Manager for Engineering Applications

FNMEA is all about getting insights into your license usage.  Back in the GLOBETrotter days, companies used SAMSuite in order to get at the “encrypted” data in the ReportLog files.  I use quotation marks because this encryption is not really encryption at all.  It is more akin to obfuscation than encryption.  I suspect it does not use real encryption due to US export laws.  In any event, many large companies in the late 1990’s and early 2000’s had created their own data flows that looked like this:

After getting the unencrypted data in a RIF (Report Interchange Format) format (CSV), companies would add organizational information based on the username in the Translate phase and finally import the data into a database.  From there, they would perform their OLAP analytics on license utilization, costing, etc.  It was painful to have to develop and maintain, but by the mid 2000’s, necessity had caused most organizations to build such structures.  That is also around the time that Macrovision introduced their “all in one” reporting suite called FlexNet Manager and sunset SAMSuite.

FNM offered small to mid-sized businesses a turnkey solution for collecting report logs, importing them into a database and providing a visualization tool in the form of a bundled version of Cognos.  I suspect it was those companies who initially bought into the solution.  Most of the larger Semiconductor companies I know fairly actively resisted going because of cost and complexity.  Plus, most of us already had something that was working.

FNMEA took a java program and turned it into this: 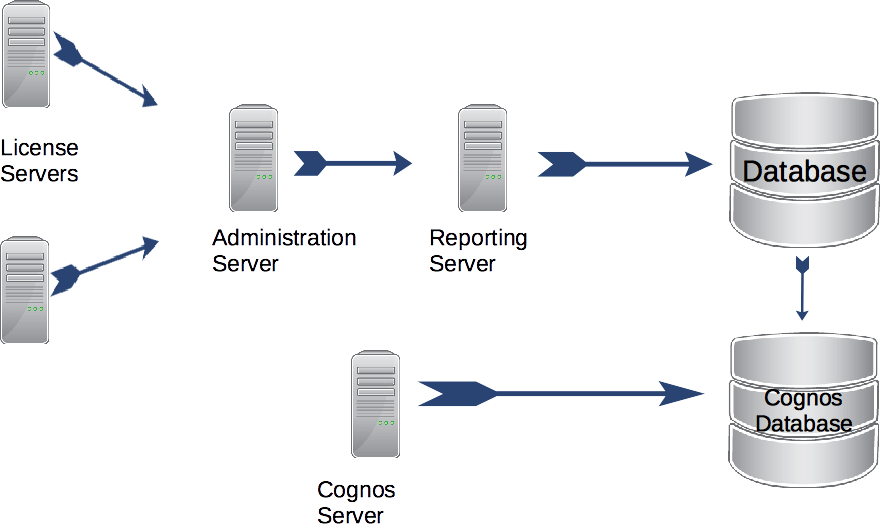 For the small to medium sized business, this was an improvement as they no longer needed to develop and maintain all of the data shuttling and storing infrastructure.  Their data sets were small enough that they could do reporting reasonably well and having Cognos gave them the ability to do some visualizations.  However, large companies already had this.  Throw in some “Not Invented Here” Syndrome and generally poor product quality and large companies opted not to pick up FNMEA for a long time.

Except, the problem was that Flexera repeatedly told customers that one day they were going to change the ReportLog output format so that SAMSuite would not be able to decrypt it anymore.  I can’t say for sure if they did.  Certainly vendor daemons up to 11.13 were “readable” by SAMSuite, but it’s unclear if the output from those versions is “correct” or not.  FNMEA has issued patches around ReportLog imports, while SAMSuite has been untouched for some time.  It was this uncertainty around decryption that finally led bigger businesses to yield and begin purchasing the product.  However, these businesses now had more than a decade of data in their legacy databases.  And they had processes which depended on automated report generation via third party tools they had in house.  So, this is the ultimate architecture diagram that ended up being put in production at most large Semiconductor companies: 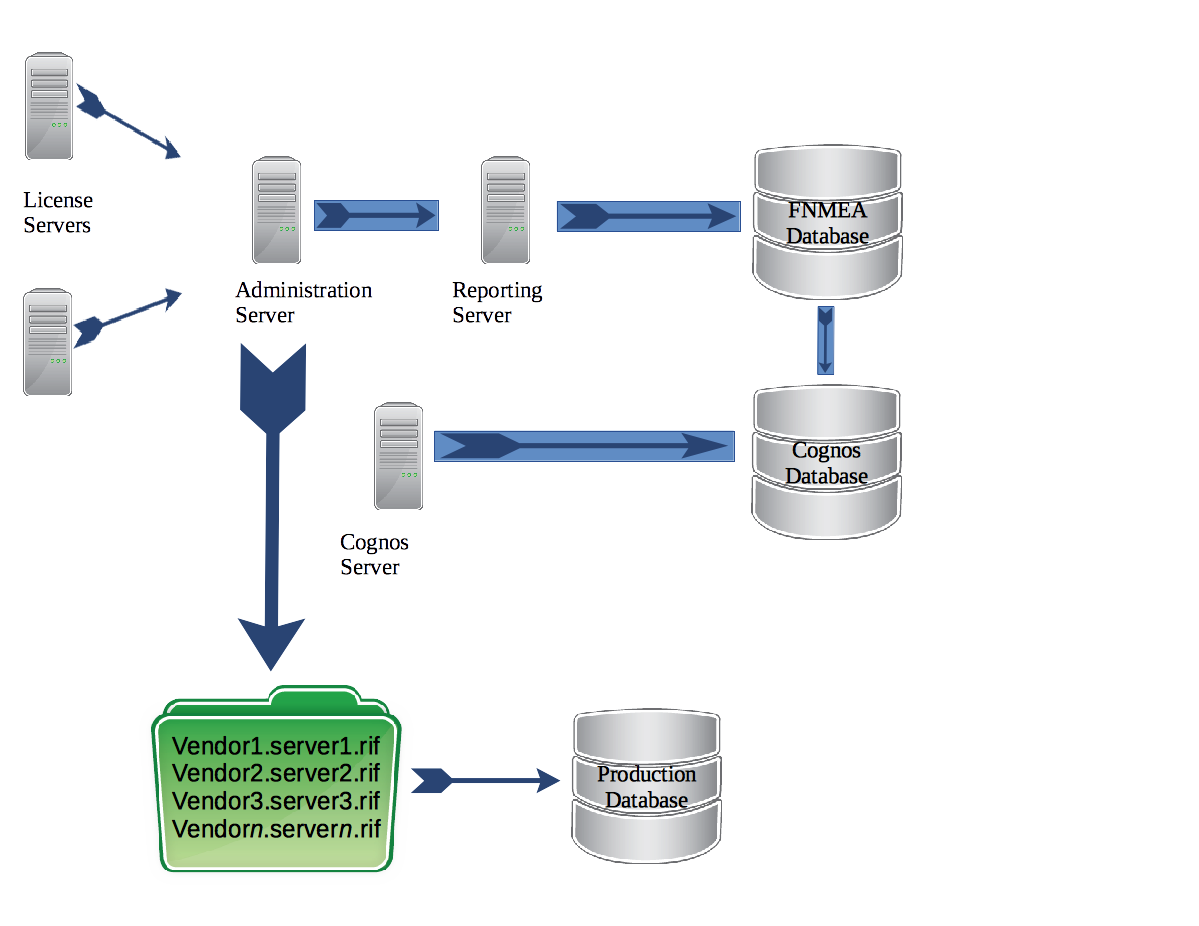 FNMEA does have the ability to export files into CSV, which they call RIF.  These are the same format files that you used to get out of SAMSuite.  Only now, instead of just decrypting the original files and putting them into your database, you are forced to have the Admin server pull the ReportLogs in to an Oracle or Microsoft SQL database, only to export them to a CSV format, perform your ETL (usually adding business unit info to each user) and pull it into your “real” database.  I’ve asked Flexera about just connecting directly to their DB to get insights, and we were warned that doing so might yield unexpected results.  If you must have your data in another data source, they told me, you must export the data again since it has some logic in there.

What a colossal waste.  I now have to have duplicate copies of my data, adding to storage costs.  I need to have at least two commercial database instances that I pay for, along with the server and storage infrastructure to drive those.  And I *still* have the same reporting infrastructure I had before because there are some number of customizations which are difficult to impossible in the new setup.

FNMEA ships with an OEM version of Cognos.  I’ve not used it extensively, but when I have used it, I’ve not found it to be an intuitive interface in the slightest.  And because we’re talking fundamentally a SQL-based data warehouse in the back end, you’ve got to do periodic data aggregation instead of having every transaction available.  Since the time that this product debuted, technologies like Hadoop and Spark have gained maturity and are built for dealing with the volume of data license transactions debut.  However, if I want to use those, I have a very circuitous path to get the data in, as evidenced from above.

Most large companies, and even medium sized companies now, have access to “Big Data” processing capabilities.  They have visualization tools and back-end processing that completely dwarfs what comes from FNMEA and Cognos.  The visualization of this now-dated version of Cognos is just not great compared to other, more modern tools.  Plus, my analytics team doesn’t know anything about this schema or even Cognos itself.  All of my other data, which I would like to use in conjunction with my license data, sits in other data sources.  My license data, which is very valuable because of the amount of money we spend on software, is sitting like an anchor around my neck because it’s not as useful as it could be.

So, here is my ask for FlexNet Manager for Engineering Applications:

Let me Process My Data In The Systems I Want

Give me a tool that will take the report log file data and extract it to the system I want.  You don’t have to stop selling FNMEA as it is today.  This is not an either-or proposition.  Just give me a tool that will export data into something that another system can directly read without me having to go through the Database Two Step.  The world has changed greatly since Macrovision introduced FNMEA.  SQL databases no longer rule the Big Data world.  Cognos is not a cutting edge visualization tool.  Organizations want more control over their data, not less.  Or better yet, give us the ability to stream the data, unencrypted, in real time into something like Splunk.

I suppose it’s not much of a wish list since it’s only one wish.  But if you grant me this one wish, most of the other wishes I have go away.